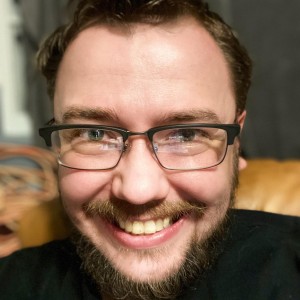 The Cerulean Standard is the work of Rick Beckman, writing from a small town in Indiana.

I’m a husband, a father, a former Christian fundamentalist, an atheist, a geek.

I’m an ordained clergy person in the Church of Spiritual Humanism, and am the founder of the small but growing Secular Now movement/community, wherein I publish a series of vlogs which I invite you to view.

The Cerulean Standard is the current incarnation of a long series of website and blog projects of mine, dating back to 2001, with names like Beckman Family Ministries, Rick’s Watchtower, Watch Therefore, Timothy’s Burden, BrazenlyGeek, BrazenlyWP, Ex Astris, Kingdom Geek, The Apologiapedia, The Brethren Theological Institute, The Theologist, Ascending Olympus, and who knows how many others. These sites took the form of static websites, blogs, and wikis and covered personal journaling, theology, Bible commentary, WordPress tips and tricks, and more.

Today, this site is The Cerulean Standard, a name which appropriately refers to being in a state of disarray or confusion. More than that, though, I believe that religion has the world at sixes and sevens, the end result of billions of adults who can’t reliably tell fact from fiction, science from mythology, morality from holiness.

The topics I’ll write about here will still run the gamut of topics I’m interested in, and for the most part, I plan to leave my older posts which were written as a Christian fundamentalist where they are, for anyone interested. Anything written prior to around Fall 2010 should be assumed to be written from this fundamentalist perspective.

So well put, particularly in regard to 9rules. I’m so glad to see more religion blogs being accepted, and especially those in love with Jesus! God bless you.

Thanks so much for your comments, Natalie! I checked out your blog–awesome design! I love all the li’l details in it.

I don’t see you yet on 9rules’ Communities page, so I’m guessing you were a Round 4 recruit? If so, congratulations, and keep up the great work.

ha ha, no, I’ve been a 9ruler for awhile, but they put me in the design category instead of religion. :)

Ooh… *smacks myself* I see what I did. I didn’t even notice some of the communities have so many members that not all of them are listed on the main pages. The Design community and its 50+ members is one of ’em. No wonder I missed you on there. But, I do see you on the 9rules “design” community page..

Anyway, again, great blog, and thanks for the comments. And nice to meet you!